Hi there! I am so glad that you visited this simple blog of mine because of any reason 🙂 Hehe. In this page, I will introduce myself.

My name is Salsabiilaa Roihanah. Yap, that’s my full name; with a rather difficult spelling because of the double i and double a on my first name 😀 (See the picture of me above? Uh uh, my name wasn’t spelled corretly… hehe). But you can call me Salsa. I am a fifteen year old girl living in Malang, East Java, Indonesia. I was born in Kediri, 18th January 2000. I am a secondary school student of SMA Semesta, a bilingual boarding school located in Semarang, Central Java. I am feeling so blessed every single day, because I am always surrounded by beautiful, loving, and supportive people. My parents, Budi Setia Darma and Ummi Massa Suryaningtyas, are both an entrepreneur. I don’t have any brothers or sisters; I am the only daughter in my family. I never feel lonely though, because of the fact that my parents make cookies at home, so they always have a lot of time for me 🙂 Lucky me, yeah 😉

I spent my childhood in Kediri, before moving to Malang when I was three years old. I went to a kindergarten named TK Al-Husna and an elementary school named SD Ummu Aiman Lawang. I can say that I was an active student back then. I joined many clubs and after school activities, so in those six years during elementary school, I tasted a bit of Angklung Club, Pencak Silat, Gardening, Scout, English Club, Marching Band and even Traditional Dance! I competed in several events of Pildacil. It is a competition where the participant delivers a speech that motivates the audience to do good things as Islam has told us to. It really built my confidence, so that I could speak in public easily and smoothly. It is a kind of skill that now I realize is very important for the future.

Reading and writing are always on the top of my favorite things to do list. I wrote my first novel when I was eight years old! It is a simple novel, written by hand on a 50 pages notebook, and tells a story about an adventure of three best friends in a boarding school. I kept writing and writing, some of them are not finished, but some of them are. These stories were sent by my parent to Mizan Publishing House. All praise to Allah, my own book was published in Kecil-Kecil Punya Karya Series by Mizan Publishing House at age nine. I was so thankful beyond words.

I made two other books, and those two were published in the following years. For more information about my book, you can take a look at my page here. Surprisingly, being a writer is not only about sitting in front of a computer and typing a story. As a writer, I got an invitation to go on roadshows. I went to some elementary schools  in my town and other towns nearby and even a different Island! Again, these activities really opened my eyes about the importance of confidence, creativity and achievement. If you are able to reach an achievement, people will listen to your ideas and opinion. You can inspire them, give them spirit and lead them to dream big. But those can only become a reality if you have a will to work hard and make your dream come true. So …

Another important part of my life is science. Science fascinates me. Studying science; whether it is Physics, Biology, Chemistry, or Mathematics is always a joy for me. Scores at school is not my main motivation. I am just curious. That curiousity leads me to reveal the beauty of this universe.

I joined Olimpiade Sains Nasional 2011 for elementary students. I competed in Science field. Alhamdulillah, I went home with a silver medal. And this small step opened a path to a life with lots of experiences I had never imagined before.

Yap, I went to SMP Semesta Semarang and became a student there for three years with full scholarship. I competed again in Olimpiade Sains Nasional, but of course for middle school students. I chose Biology as my Olympiad subject. In Olimpiade Sains Nasional 2014, I got Gold. I started to write the stories of my Olympiad journey in this blog. You can see them here. I was surprised by the amount of positive feedbacks I received. I coud reach out to people thousands of kilometers away from me. It motivated me to write more.

Because of that Gold medal, I got a chance to join a training center which select students who will represent Indonesia in International Olympiad. Finally, twelve people were selected to compete in International Junior Science Olympiad 2014. Alhamdulillah, one of those people was me. Guess where were we going? Argentina! A far away land across Pacific Ocean in a completely different continent and culture from the country I live. I brought a Bronze medal back to Indonesia. It was a once in a lifetime experience that I would never forget. Of course, I wrote a serial of stories about it here.

In 2015, as a try out, I joined Olimpiade Sains Nasional, BUT for high schoolers! I kept my expectation low, because I was really aware of the difficulties of high school Olympiad and tough competitors. All praise to Allah, clearly higher than my expectation, I got Bronze. The story behind that medal was a life lesson that really changed me to be a better person. See them here.

I was graduated in 2015 with a predicate as The Best Student with Excellence in Attitude and Academic. Those achievements were nothing compared to real life lessons and best friends I got from that school. It was amazing.

I continued my education in the same school, just different level. SMA Semesta is a place for me to study for the next three years, still with full scholarship. Talking about my Olympiad career, it is far from ending. All of OSN 2015 medalists got a chance to enter Pelatnas, a series of selection for National Team that will represent Indonesia in International Olympiad. Pelatnas stage 1 was the farthest I could get for now. I have lost my chance to go to International Biology Olympiad 2016, but the stories I brought home from that event were worth it.

A summary of my achievement is written here.

From all of those experiences in olympiad competition, I draw a conclusion: medal is not everything. What matter the most is your self improvement during the competition. I feel that I become closer to Allah, grow to be more mature and wiser, and get to know soooo many wonderful people from all over Indonesia. Those are more precious than merely a medal.

This blog is mostly about my olympiad journey, my views or opinion about something, my experience about travelling somewhere, some science stuff, or simply a result of my contemplation about everything that is happening around me.

I love making friends! Although in real life I can be a bit awkward and antisocial but … I’ll try my best nonetheless! Hehe. 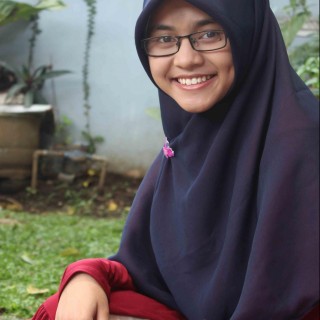 17 years as a learner of this amazing world and continue to be one. Interested in science, writing, reading, and everything between those three. Currently trying to turn memories and imagination into words. A faithful lover of cats, chocolate and any black-vanilla favoured food.